We would like to extent a warm welcome to Zaphod. After an intense interviewing process we have decided he is a suitable member for our pack. 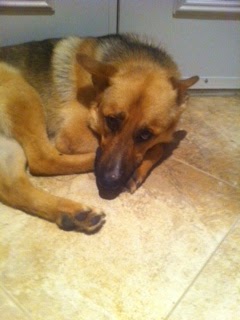 Here is a little about him: He is a shepherd, between ages of 1-2.  He was found as a stray and picked up by the Plantagenet pound. He was seriously underweight suggesting he had been on his own for a while (he still has some weight to put on).  He was rescued by Catahoula Rescue (the same rescue that saved Haley from a certain death). After letting Gloria Baggs from the rescue know we were looking, she suggested Zaphod as he is cat friendly (a little interested in Nin today as Nin will not stop hissing and he clearly wants to be his friend) and a real calm soul. He had been with his foster mom Jenn for 2ish weeks.

Getting to know him, it is clear that he had been with people before. He sort of gets the house rules, he understands and listens to the word no (this has never happened in our house before) and he has better recall then Miss Bug (it is sad when the stray has better behaviour then my own dog that I have worked with for 2 years. Hailey says this is because she is a free spirit and not meant to be the subject to human control).

I will admit I never pictured myself owning a shepherd, but he is so calm and sweet and this is what I wanted over breed. This is a reminder that we should not judge a dog by its breed anymore than we should judge a person by their race or ethnicity. We should all be judged for our actions or inactions.

After a great play and run with Hailey, we had a quiet evening. After Jenn and Gloria left last night he just sat by the door. He would periodically come check to see what we were doing, but then would just sit by the door. After a while he did settle in to our bedroom with us. We are very happy to report that he seemed very happy to sleep on the floor (we really don't have room in our bed).

This morning he has been more active. He and Hailey have had a good wrestle and we had a great game of fetch in the dining room (it is 29 feet long so lots of room for fetch). He seems happy to be walking around exploring, while Hailey is happy to be napping on the couch.

He has marked in the house twice. Once just before Gloria and Jenn left (on our bed of course) and this morning in the garage where I had taken him to eat. I don't know what it is about this garage and peeing.

The big test today will be can I take both of them for a walk.

Our big decisions today: 1) do we change his name 2)  do we want to get a crate for him for when we are both out. If so, where do we put it?

So that is my crazy life for today. I am sure Lee and Big Zee will have many adventures together! (Things more exciting then they both pooped on leash when I had both of them together this morning).
Posted by Hailey and Zaphod and their Lady at 8:49 AM