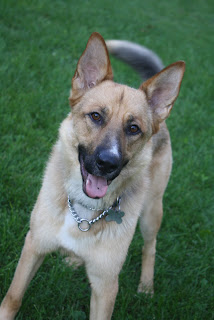 Zaphod was picked up as a stray East of Ottawa in the summer of 2012. Catahoula rescue say him in the pound and rescued him. He joined our pack in August 2012. It is estimated that he was born early 2011.

He is a German Shepherd mix, who loves belly rubs, playing fetch, getting brushed and making his people happy. His history is clearly mixed with some abuse and if he thinks he is in trouble (sometimes it is Lee getting scolded), he will cower, waiting for a beating. Hopefully he will learn there is only love in our house.

He is the sweetest, calmest dog we have had and we look forward to getting to know him better.