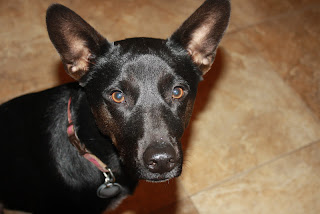 Hailey was born in Ohio in January of 2010. She was part of a litter that was rescued from a high kill shelter by Catahoula Rescue. Three of the puppies were clearly Catahoula and 3 were like Lee. The Rescue guesses someone put them together as a litter to save their lives. As so many dogs are rescued in areas with high kill shelters, Hailey was transported to Ontario with a group of other dogs and several months later was adopted by us.

We adopted our beautiful mystery mutt knowing she was high strung and with the belief that she would calm down. We are still waiting for that to happen.

She is very smart and easily learns tricks. She also does a great job at ignoring her people. When she is on the hunt/sniff, there is nothing you can do to break her focus. She is a free spirit who suffers from severe anxiety.

Even though there are days she drives us crazy, we are glad she is part of our pack!