Saturday was the day of the big party! To try and keep everyone safe, the Lady and Man did this to the hole.

During the party people were on the lawn playing games like Bolaball, Bocce and frisbee - everyone avoided the hole.  While we were all sitting around the campfire. Aunt C hadn't noticed the hole and asked what we had done to fill it. I told her. I told her it should be so obvious only an "idiot" would fall in it.

Later, as it was time to put out the fire, a comedy occurred. I went to turn on the hose, forgetting there was a hole in it. The water was shooting at Uncle D's radio, I quickly grabbed it and turned it. The water was then shooting at Uncle Chris, who was carrying spoiled Emma in one hand and a chair in the other. When he saw the cold water coming toward him or when it got him (I am not sure which, but he was kinds screaming like a girl), he panicked, and in his panic tripped over the blocked hole dropping the chair and throwing poor Emma. Fortunately, other than a little bruise on his elbow, Uncle Chris was fine and Emma was just put out that she had flown! If only I had taped it. So we now know who the idiot in the family is!

A very special and heartfelt THANK YOU to everyone who voted for Hailey in Sammy's Teacher's Pet contest. Hailey is very happy to have won! It is at a good time for us as I am feeling a little sad for my girl. 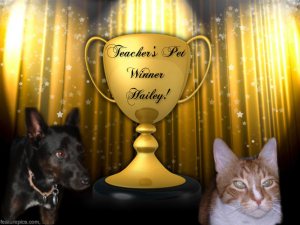 Posted by Hailey and Zaphod and their Lady at 7:33 AM

Email ThisBlogThis!Share to TwitterShare to FacebookShare to Pinterest
Labels: mischief