Well today was the day I gathered Nin up and we drove the one hour one way to the vet.

Note: This video was taken in the garage before we left - I did not film and drive.

We arrived at the vet and Nin was so happy to be out of the crate he did a good job on the scale and it was almost impossible to get him back in. He has lost 2 kg since his last visit. He went and got his blood and we drove home.

Whenever I go to the clinic (which is an emergency clinic) something exciting happens. This was not a good exciting. A couple's dog collapsed in the parking lot and they didn't think he was breathing. He was raced in on a stretcher and his owner came in screaming she needed to know if her dog was dead. She was screaming at the staff and screaming at herself . . . she was whisked into a room. I don't know what happened to her dog, but I hope he was ok.

After arriving home, Nin slept. He slept all day. He started in the dog crate and is currently sound asleep on our bed, a place he rarely sleeps. We will get his results on Wednesday. 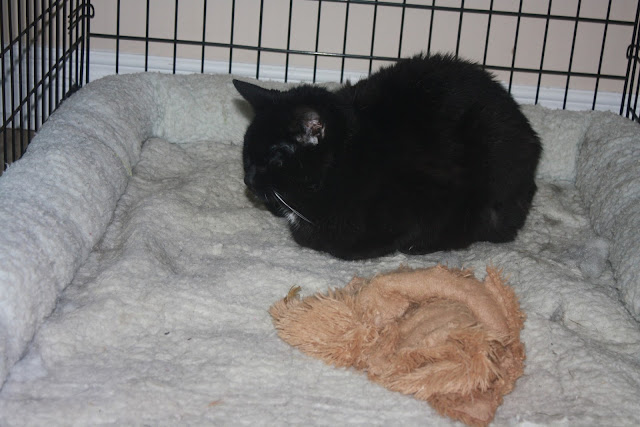 Now it is time to catch up with all your blogs!

Posted by Hailey and Zaphod and their Lady at 6:06 PM