I have the pleasure of working at home sometimes, not often enough, but at least one day a week. Usually it goes very well. It looks something like this:

These pictures are taken while I am doing a Skype consult! 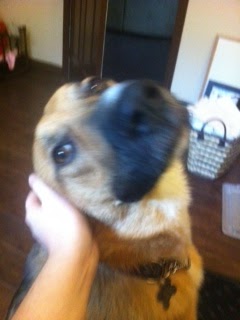 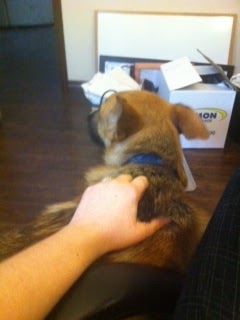 However this week on Wednesday, the 2 of them drove me insane!

We did our morning routine with a shorter walk because I knew I would be taking them out more. Hailey kept bugging to go outside and then just wanted to be out there. It made me want to go out and build a dog run (which I think will be a must have in the spring).

Then around 4:30, Hailey would not let up on wanting to go out. This is about the time the man normally gets home so I took them out. The minute I opened the door I knew I was screwed, I smelt the fox. There was nothing I could do but keep calling as Phod disappeared down the hill in the back, which caused Hailey to lose her mind and scream. I waited a few minutes calling as generally he comes right back. I could hear all the dogs over a street barking and knew he had gone far. I had to drag a screaming Hailey back into the house, grab my coat (it is cold out) and leash and then squeeze out the door without Lee escaping.

Slowly I started walking in the direction he had run, calling his name and periodically pausing to listen for him coming. Just as I hit the path in the bush (which in places runs beside the road), I heard him and to my relief and horror, he was walking on the road. It appears he was heading for home.

As soon as he heard my voice, he turned and came through the bush to me.
The whole thing was less than 10 minutes, but it felt like forever. I did my best to remain calm, and take deep breathes, although my heart was pounding so hard I thought it would explode.
Once we returned, Lee was thrilled to see him and the two wrestled and played.

New rule: Phod goes out on leash. If we assess nothing is around, he goes off. He has had a few mini take offs the past few days and my heart can't take it!

Posted by Hailey and Zaphod and their Lady at 5:59 AM