Mischief on a Thursday - by Hailey

This week has been so full of mischief so far, we can't even wait until Monday to tell you. I have had nothing to do with the mischief so I will report it. 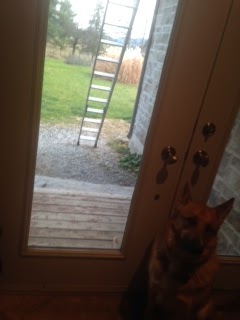 [Editor's note: The neighbour had said he would be over to sweep the chimney. He came over with a friend and they went right up. The Man joined them for the annual roof inspection, clean out the gutters.]

Then on Tuesday morning as Lady was about to leave for work, we all heard a rattling under the sink. Lady like a complete wimp bravely opened the cupboard and saw it was full of mouse poop. She was sort of brave when she set the trap. She let the Man know. All day we heard them. 2 mice were caught in the trap and one was in the humane trap. When Man opened the cupboard we could see them. We weren't allowed to have mouse appetizers for dinner. That is just not fair. In the evening another mouse was captured in the humane trap and by morning a 5th in the humane trap. This brings our mouse total to 22.  2 of those I am very proud to report I caught.

There is even more mischief, but  Phod wants to tell it, so we will save it for another day.
Posted by Hailey and Zaphod and their Lady at 6:00 AM