Mischief Monday - What a Day!

It started with Man realizing as he was leaving for work that he had a flat tire. Fortunately, Lady was working from home, so he could take her car. Lady dealt with having CAA come and put the donut on. We were very mad that we had to stay in the house while Lady was outside with a stranger. We barked the whole time. Lady said it was amusing because the guy who came to deal with the car only spoke French and Lady doesn't really speak French, so she really had no idea what he was saying. 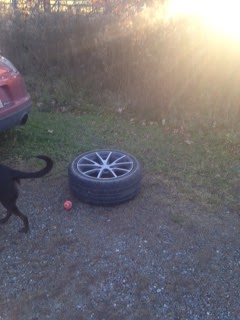 Then, after dinner, Lady thought Phod was playing in the bedroom. She went in to discover he had gone into the laundry hamper, taken out underwear and chewed up 2 pairs of her underwear and one of the Man's. She didn't take a picture of that to spare you all. However, she took a picture of shameful Phod. He sulked all night after being scolded. The closet door now needs to stay closed so he can't eat underwear. 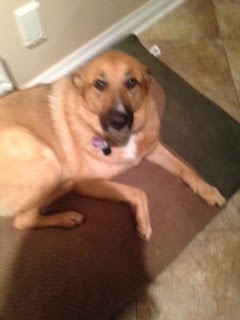