Mischief Monday - Lady Did It

Last Tuesday, while out with the dogs in our yard, in my foggy migraine state, I threw Phod's precious (his orange and blue chuck it ball) and it was lost. I couldn't even tell you which way I threw it to even start looking in the bush. Phod frantically searched on Tuesday. He was given an all orange chuck it ball, which he lost because he refused to fetch it (I actually think he hid it). He searched for Precious all day Wednesday. He searched outside, he searched in the ball basket, he searched and searched and was very stressed every time we went out and didn't want to come in.

On Thursday, his Gotcha Day, I stopped by PetSmart and picked up a package of 2 orange and blue chuck it balls, that looked just like precious. I brought them home and gave him one. I was worried that this ball that seemed almost identical would not be a replacement for precious. (Who I guess will turn up in the fall when the bush starts to die for the winter).

Phod was so excited about the new ball, he actually threw up (I think he choked himself with it). He loves the new precious. We have put one of the 2 out and the other is hidden away, for when I, the Lady, am an idiot and loses his ball again! 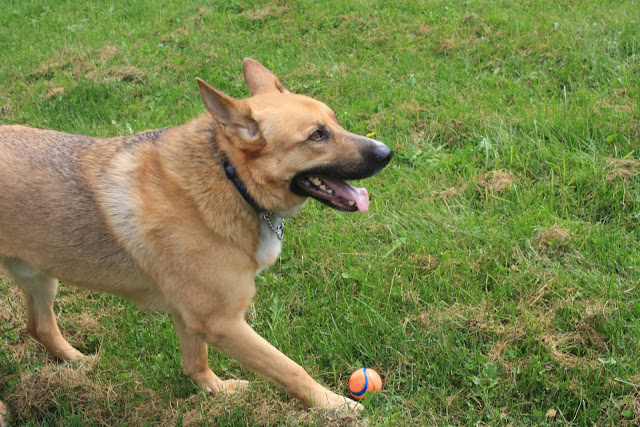