Operation - No where to sit - by Lee

As our people caught on to the counter game and started doing a darn good job at not leaving things for us to surf, we had to try something different. So, we launched operation no where to sit. Our goal being to destroy the bench that isn't even 2 months old so they would have no place to sit and put on their shoes. No shoes = no going out.

The man came home to this. 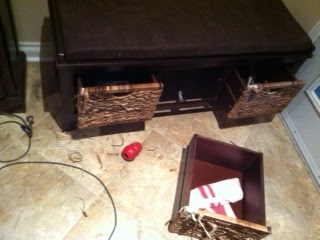 When the Lady came home (she had been gone forever. She said it was only 36 hours, but we said it felt like forever), she interrogated us again. We missed her so much and we did feel a little bad that she was unhappy.

We have heard that our Lady is going to find a steal cage and we will be crated when they go out. We think this is all talk, but she seems a little frustrated with us. She said something about wanting nice things. We thought we were nice things! She also said that we had been doing such a good job about being trustworthy, she doesn't know what got into us. I told her to read the blog. She sighed and went and unpacked and did dishes.

Posted by Hailey and Zaphod and their Lady at 6:21 AM

Email ThisBlogThis!Share to TwitterShare to FacebookShare to Pinterest
Labels: by Lee, destruction