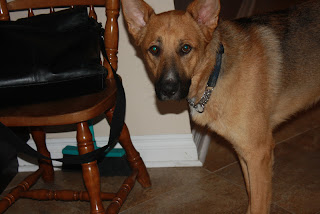 It is really hard to imagine that it has only been 3 months since our Zaphod entered our lives. It feels like he has been part of the pack forever - in a good way. I was worried when Phod joined our pack so soon after we moved. We were barely settled (only having been here for 4 days). However, this was never an issue. He is just such a sweet boy. (Who is learning some mischief, but more about that later).

My favourite time with Phod:
At night. I usually go to bed first and he crawls into bed with me for a pre-bed snuggle. I also love in the morning as I am waking he comes and stands beside me so I can pet his head!

His cutest habit:
He will sit outside the closet we keep his ball in looking longly at it. He general does this late at night, when it is just to dark to play and there is too much concern about wild animals of the dangerous kind (skunks, porcupines) to be off leash.

Favourite thing about him:
Even though he has started to go on adventures (aka run away after wildlife) I truly believe he will always come back.

Favourite physical feature:
I love his ears. They are so expressive and he uses them to communicate. They bend in so many ways.

Other Names:
Rarely does an animal in our house get called his/her given name (I don't know why I go to so much effort worrying about names for them!). Zaphod is also known as Phod, Phody, McPhod, Phoderick Von Lickentstein, Big Boy.

Posted by Hailey and Zaphod and their Lady at 7:36 AM