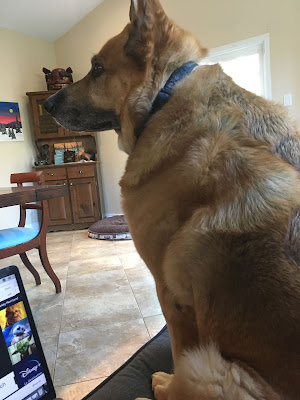 This is my 80lbs, 9 or so year old German Shepherd Mix freaking out.
He is trying to crawl onto my lap while I was creating my nieces's birthday story.
He was so stressed he drooled all over me. 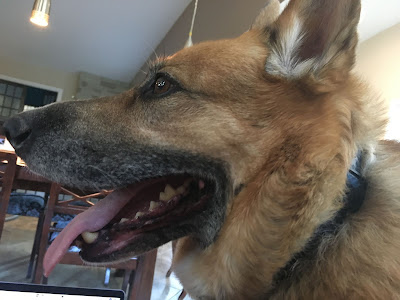 He never use to be fearful, but thanks to Hailey he has become almost as fearful as she has. He just is less destructive about it.

What caused all this fear?

On Saturday we left the house in a car for about 30 minutes. Literally as we were pulling in (we were able to open the garage door, but not close it), the power went out. It was out for about 10 minutes. Later in the day, the power flickered and was out for maybe one minute. This picture was taken during that time.

The power going out is the scariest thing ever for Phod.

Earlier in the week, when the Man and I were both on calls, our carbon monoxide detector decided to tell the whole world it was at the end of its life. The beeping caused Phod to be scared in his passive way and Lee to start digging things off the shelf, digging me. I excused myself from my meeting and put the device outside so they couldn't hear it until we had time to deal with it. Once they couldn't hear it, they settled.

I am wondering if they will both need anti-anxiety meds when we re-enter the real world!
Posted by Hailey and Zaphod and their Lady at 6:00 AM