Baggy is our first fur kid.  He was the king of the jungle until about 12 years ago when we brought the first dog (Loki) home. To say he hated Loki and Gemi would be an understatement. He did not like anything about them. This is mainly because they chased him and took his spot on the bed. He basically lived in the basement for 8 years, a place off limits to the dogs.

After Loki's death, he started to become a little more tolerant of Gemi. Since then he has become tolerant of the dogs. He will be out and about when they are around. He has tolerated a sniff from them (often with a protest). But while he hasn't acted like he is plotting to kill them every second of the day, he hasn't been overly friendly with them.

You can imagine our shock last Friday when the following happened (please excuse the poor quality of the pictures, I only had my phone and didn't want to leave to get my camera).

Baggy came into the room. We put him on the bed (as he can't jump up anymore). Then he went and snuggled right into Phod.


Then the unthinkable happened. Bagheera, the dog hating cat began to lick Zaphod. He licked him for several minutes. The Man and I watched in shock and awe really that this was happening. Phod just put his head down and didn't move.


This snuggle lasted for at least 15 minutes. It lasted until the Man had to get up.

Later that day, we came upon this: 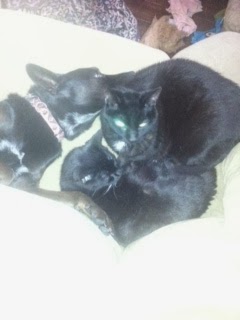 Lee, Baggy at the top, Nin at the bottom, curled up on the couch. Note that Lee has her mouth and head touching Baggy.

Clearly Baggy lost his mind last Friday, that or the end is near!

Posted by Hailey and Zaphod and their Lady at 6:22 AM