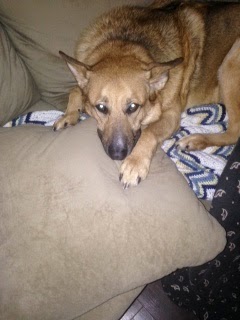 On the weekend I went to a party for friends who had just completed their second 101 things in 1001 days list. As they were wrapping up this list the plans for the next list were in place. One of the items was to learn about DNA. When asked why, my friend jokingly said "so I can clone Zaria" (her cat). Her dad asked her why she wanted to clone only one of the two cats and she went on to explain that while she loved them both, she thought having the other again just wasn't necessary. (Athena is anxious and has some issues).

This led the Man and I to have a conversation about which pet we would clone if we could. Looking at the six we have had, here are our choices and why:

The Man: Bagheera - Beside from eating the magnet, he was the least troublesome. As he was a cat, he could be left for a weekend. He had longevity.

The Lady: Zaphod - He is my big, sweet, snuggle boy. He has the best temperament of any of the dogs we have had. So far (knock on wood), other than ear infections and a few injuries that could happen to anyone, he has been healthy. It is relaxing to have him around.

Have you ever thought which pet you would have again?

Come back tomorrow for a special day!

Email ThisBlogThis!Share to TwitterShare to FacebookShare to Pinterest
Labels: conversation