For some reason I got into my head that I should do agility with all 4 dogs. 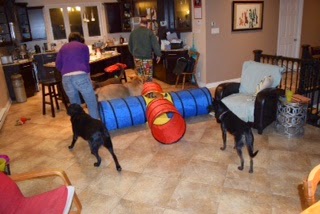 First trick (sorry no pictures) was jump over the broom stick. Hailey and Barley excelled. Hailey kept showing off that she could jump over it when it wasn't her turn. Phod did it once and decided it wasn't worth the payment. It took a long time for Tendra to figure it out, she kept trying to go over but she did get it.

Trick 2 was the tunnel. When Tendra and Barley took agility, apparently this wasn't a favourite. Hailey again showed off her mad skills but whipping in and out while I was trying to coach the others through it. Phod went a few times, including a very funny time through the middle to get some cookies. It took some coaxing but Barley did it. It was hard for him as he is such a big boy and it was a little tight for him.  Tendra got quite good at this and was soon running through it. 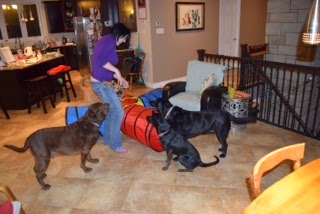 It was a lot of chaotic fun!