Yesterday morning Zaphod woke up with a limp. At first I thought maybe his leg was asleep, but he continued to limp. Despite this limp, he wants to play ball. He will still wrestle with Hailey and run after things in the bush.

Because of this limp we are trying to minimize his activity. He was sad when he didn't go on morning walk yesterday. He is the saddest boy ever every time we go out and we don't take the ball with us. He gives us sad eyes. Clearly he thinks he is in trouble. I of course try to explain it to him, but I don't think he understands.

So he is sulking. We are having a disagreement about when he should go to the vet.

We aren't 100% sure what is wrong. We know it is his front left paw. We think it is his shoulder. He did crash into a tree on Thursday when playing ball. Maybe that is it.  We will keep watching him and try and get him to rest, which will be a bit easier since it is raining out again. 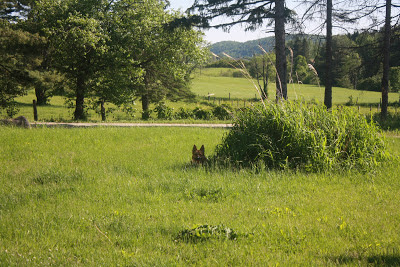 Where's Phody? From before the injury, resting after some fetch!

Posted by Hailey and Zaphod and their Lady at 9:28 AM