With the countdown to Christmas on, we hate to be reporting mischief, but we must be honest. We are sure Santa is way too busy this week to be blogging anyway.

Mischief one: Blogger. It is not allowing Lady to leave comments. Recently it started doing this thing where she had to sign out, clear the history, sign back in and it would let her comment. Now it will let her in but not comment. She is going to keep trying to figure this out and will have some extra time over the holidays to fight patiently play with it.

Mischief two: Phod!  It is rare for the mischief to be his, but it is. Last week, he refused to bring his disc in. Lady and Man told him, it was going to snow and get lost and it turns out they were right. The next day it snowed and disc was gone. Phod frantically searched the yard for it, but could not find it. He was very upset. Lady and Man could not let him remain so stressed, so while they were in town doing errands, they brought him a new one and gave it to him as an early Christmas gift. He was soooooo excited. Lady and Man are making him bring it in every day so it doesn't get lost too. They said there is a 2 disc limit per season. 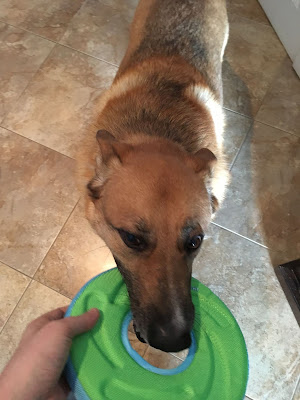 Final mischief: Lee's tummy. Seems there is something up with her. Lady and Man had thought it was changing food (although that has never been a problem before and the food was one she had eaten before). They have changed food  again (for a third time back to another food she has eaten before) and are cutting out all treats and extras for a few days to hopefully sort it out. If not it will be a trip to the V-E-T. She seems fine, her appetite and behaviour are normal but without going into details, her poops are not right. A little POTP that she will be all better soon.
Posted by Hailey and Zaphod and their Lady at 6:00 AM