Saturday was Phod's annual check up.  The Man and I and the dogs piled into the car and drove the hour to the clinic and then the dog park.

Lots of mischief occurred on this trip.

1) The Man and I decided to try Hod in the car without his anti-nausea meds. While Phod was clearly more relaxed, he did get sick. We picked up more meds for our next trip.

2) Hailey and Zaphod both were not well behaved in the lobby at the clinic. They did sort of ok before the appointment but after when I was trying to pay and get Bagheera's remains and cat food for Nin, the Man actually had to take them outside. They were a bit embarrassing (and it being a Saturday the clinic was very, very busy). I said to them "Baggy was the best behaved on this trip." 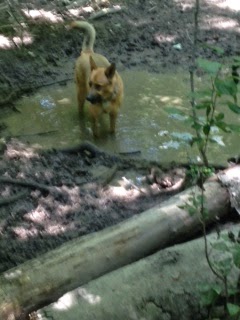 3) I get a huge fail as a dog owner. I didn't realize Phod had a yeast infection in his left ear. It had looked a little dirty, but I thought nothing of it. I didn't know German Shepherd's were prone to ear infections (this is Phod's first). We now know what it looks like so can watch for it. We also have drops to help clear it up.

4) At the dog park Phod found the one puddle and played in it, right after the vet said no water until his ear heals. Silly boy!

5) Hailey ate poop and had the stinkest poop smelling burps ever!

The trip wasn't all mischief, it had it's good points:

Other than the ear infection Phod is completely healthy. He weighs in at 70lbs, which is about 8 lbs more than last weigh in. The vet said both he and Hailey look perfect and he isn't at all concerned about the weight. I have to remind myself that when we got Phod he was very, very underweight (about 45 lbs), so perhaps it has taken him these 2 years to catch up and finish growing. 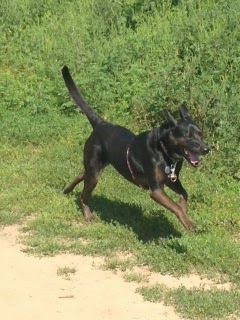 The vet checked Hailey's butt again because she has been obsessively butt licking the past few days, but there is nothing wrong with it. She just likes to lick her butt.

The dogs were super stars at the park. We picked one of the hottest days of the summer to go and we went at noon. The park was quiet. We walked slower, took lots of water breaks and stayed in the shade as much as possible. The pups ran, sniffed, played with other dogs and had a lovely time and no one got too hot.

Overall, it was a rather successful trip to town and the pups were exhausted the rest of the day!

Tomorrow is our instalment in Safety Week - please drop by. 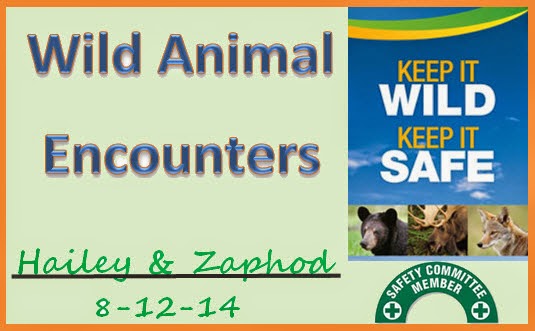