Apparently instead of spending time teaching us to do cool tricks, Lady needs to teach herself to walk. She missed one morning of walk as she was away for work and today she hurts herself. 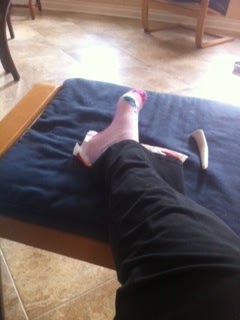 We were having a nice walk. It was later in the morning cause Lady got home so late last night she could sleep in a little. We were on our way back, about 1 km from the house. We were around a little bend, with a little curve and Lady could here a vehicle coming. She stared to reel us in and move to the side and somehow in this tripped on a rock and rolled her right ankle.

She says the pain that shot through her leg was terrible and she thought those HBO words but was actually silent. She took a few steps and realized at least she could walk. She really had no other choice,  we were 1 km from home and there was no one to call to get us. So we slowly walked home.

She is icing it and hoping it is just a minor sprain and will be all better tomorrow. But it hurts a lot right now, so it could be more serious.

We are not being helpful cause we are laughing at her and telling her to learn to walk! Although we hope this doesn't interfere with tomorrows walk.

PS We did a good job at making her feel guilty about leaving us yesterday. I, Hailey, sort of gave her the cold shoulder, and Phod acted like he had never been loved!  It was great cause she felt bad.

Posted by Hailey and Zaphod and their Lady at 8:17 AM

Email ThisBlogThis!Share to TwitterShare to FacebookShare to Pinterest
Labels: the Lady, Training Thursday