On Saturday I went to Costco for our monthly stock up. While wandering down the dog aisles I spotted this: 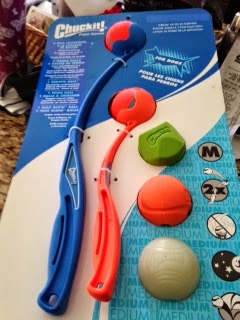 I was so excited, not because we needed the new chuck but because someone had chewed a hole in his chuck ball and I could buy the 2 throwers and 5 balls (3 which are rubber that I thought Phod liked - he has always seemed to prefer rubber to tennis) for $20 instead of $10 for one ball.

I get home, we unpack and out we take the new green erratic ball. I threw it. Phod ran after it but won't fetch. I try it  few times, he won't get it. In the mean time, Hailey who is not a fetcher, had decided she loves the erratic ball. She played a bit of catch with it and even tried to bury it (which is always what she wants to do with her favourite things).


Hailey playing and going to bury her new treasure


We bring out the new orange ball. This ball is slightly different then our current one, but it is orange and rubber. Same thing happens. I spend 30 minutes throwing balls that Phod will chase but not fetch. They are not his orange ball. He will chase it, but when he realizes it is not his ball he just starts searching for this.


Phod's not fetching the new ball


We had the same problem when we lost Chuck 1 and had to replace it with Chuck 2. I am hoping with time he will learn to like at least one of the new balls.