Zaphod - In The Beginning - Part 1

Leading up to Zaphod's 5th birthday, I am going to write posts about his early days in our pack.

In the spring of 2012, the Man and I decided we were done living in the city and wanted to move to the country. The Man started looking for houses in Quebec, as Ottawa is right on the Ontario/Quebec boarder but with the Gatineau Hills, Quebec had the hills and lakes we wanted. As a person who speaks about 5 words of French, I was nervous about this, so I struck a deal, if we moved to Quebec, I got a second dog. In June of 2012 we found our dream home in Quebec, so the search for a second dog began. I contacted the rescue we had gotten Hailey from and said I wanted the opposite dog to her. They suggested Zaphod, we met, and Zaphod joined us at the new house 4 days after we moved. He walked into our house, lifted his leg on our bed (the only time he ever did such a thing) and landed in our hearts. 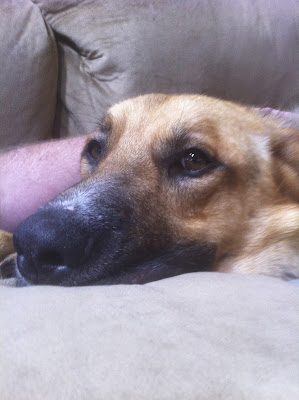 We have never been people to stop the dogs from getting on the furniture. Phody needed a lot of encouragement (he always looked like we were about to beat him) to hop up. He had a hard time relaxing. Now, he usually still waits for an invite if we are both on the couch, but is totally relaxed and comfortable. You can tell from this video (turn up the volume) how relaxed he is:

Over the weekend, the Man said "Do you remember how he use to be scared to get up?"  I said yes, and I said something like "I hope this means he has forgotten about the horrible things that happened before he was rescued." As I look at him sound asleep in the chair beside me, I think he has. Sometimes he doesn't even want to move if you ask him to! We may not be perfect pet owners, but we have created an environment of love and security. If only every pup could be so lucky!

Don't forget to submit your picture of you fooling around by March 27th for Zaphod's birthday bash! 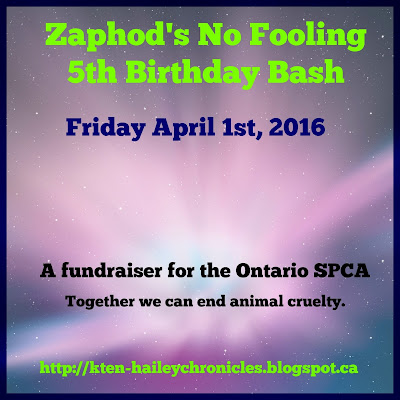 Want to help even more. Abby's Lady has offered to donate the proceeds of any of her books sold that day to the Ontario SPCA. Been meaning to pick up a copy of The Book of Barkley or Saving Grace (which I won and read and really enjoyed, LBJ has a beautiful poetic style)? Order them on April 1!
Posted by Hailey and Zaphod and their Lady at 6:00 AM

Email ThisBlogThis!Share to TwitterShare to FacebookShare to Pinterest
Labels: flash back, Zaphod