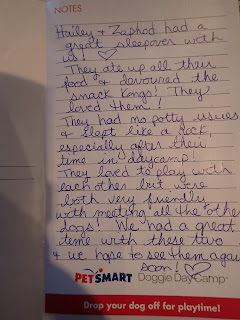 As mentioned, to help survive last week, I put the dogs in Doggie Day Camp and one night of boarding at PetSmart. I picked this place (over the place we have been using for boarding) because it was closer to where I work part-time and their drop off/pick up hours are more flexible.

On the drive in, Hailey managed to get out of her new car harness. I realized this, when driving down the highway at 100 km/62 miles per hour and she was standing on the consult between the front seats. She was then very anxious until we got past where we would go to the vet and then settled. She was excited/terrified when we pulled up at the centre. Signing them in was a nightmare as they were excited and other dogs were coming in . . . Leaving was as crazy because a puppy class was walking through the lobby to go back to the training room.

Apparently they had a good time. The staff member who brought them out when I picked them up said they were wonderful and friendly. They mostly played together. He said that while he enjoyed them both, Zaphod had a special place in his heart because he would come over, put his head on his leg for love. He was very cuddly. Sometimes Hailey would come over and push him out of the way to get love too. That is what happens at home. I was sooooo thrilled to hear that Zaphod trusted these "strangers" enough to get love. He has come so far from the nervous guy who first walked through our door.

The drive home, both slept. They actually slept the next 2 days, they were so tired. They were no worse for wear. I was able to spend a day without worrying about them at the hospital, and then work the next day without worrying about them. It worked out and I am not going to feel guilty about it any more. I only wish this was cheaper. I put them in day camp for 2 days, one night overnight, and 2 snack kongs, this was $142 Cdn/$108 US. Our regular boarding place would have been about $74 Cdn/$55 US for that time.