I Thought Pets Relaxed You! 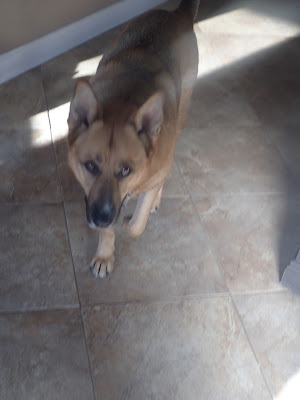 I had thought that having pets was suppose to have relaxing effect on you, but Zaphod proved that sometimes it doesn't.

The scene: A lovely Sunday morning. The sun was out, it wasn't too cold. It was nearing 11:30 but Lady was still in her pjs. The pups and I were in the driveway.

The antecedent: I am not sure what they original saw/heard, if it was the horses we haven't seen for months (and will be moving soon) or the car, but both wanted to be at the end of the driveway and Zaphod took off onto the road right toward the neighbour's car.

The behaviour: I started screaming like a crazy woman and I think waving my arms. I couldn't run after him, he had gone through the snow. I was sure my heart was going to burst or stop!

The consequence: The neighbour, who was driving very slowly, saw him and he was not hit. I mouthed sorry to him (it must have been frightening for him too). Phod ran after the car and came back. He was very happy. He thought he had protected us. Hailey was angry and him and let's just say I didn't look pretty. I yelled at him. I was shaking and scared and angry. Not that it had any effect, he still had a big smile on his face.