Mischief Monday - Going For a Wander

First, we will start this post by saying whatever was up with Phod seems to have passed (knock on wood), confirming it was a food issue. We are all happy about this.

On Saturday, Lee asked to go out. The Man made the choice to just put her out in the yard, without a leash. Our yard is still covered in several feet of snow and it is impossible to walk on for those with much weight (like Phod),  so he assumed she would not be able to go far. However, Hailey was light enough that she didn't sink too much and decided to wander into the bush behind the house.

Just to help you picture this - I was wearing my spring pj bottoms that are a capris which caused a gap of bare skin between my pants and boots (and it was below freezing), my winter coat, gloves and hat and snowshoes. Because the snow has been freezing and melting and freezing and melting, even in my snowshoes I was sinking. I got down the hill toward the edge of the property and not only stepped out of my right snowshoe, but stepped forward so my right leg was hip deep in snow without a snowshoe, and the left was behind me on the snow. 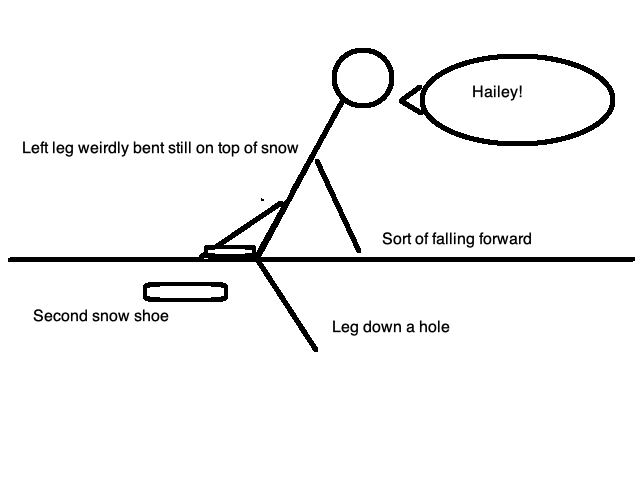 I was stuck, and mildly hurt, and I had no idea where the Man was. I called for him, no answer. Then I heard Lee barking so I called for her while trying to figure out how to get my right snowshoe that was behind me, get my right leg out of the hole,  get the snowshoe back on my foot and get my dog.

At the same time, Man who is in the house (he had gone in to turn off the stove and put Phod in), had opened the window, and heard Lee barking and me calling her. He then jumped in the car and headed up to the road (as she was near it) so he could grab her if she made it that far.

Somehow, I managed to get myself and my twisted knee (made worse by the fact I have been having IT band problems) out of the hole, into the snowshoe, and I was limping toward Lee on the path at the bottom of the hill. She has had enough fun and I could see her making her way back toward the house at the top of the hill. So I turned around and started limping home.

I got to the house and Lee was in the backyard under the feeders eating seed. I limped up to the front door, and call for the Man (I don't know where he is). He doesn't answer. I took off my snowshoes and headed through the house to the backdoor (which is downstairs) to get Lee. She was not there. I head back to the front door and there she was standing waiting impatiently for me to let her in. The Man arrived home a few minutes later.

My lessons from this - take the 30 seconds needed to grab your phone, put on snow pants and discuss a coordinated strategy for getting the dog back (when historically they have both come back).

In the end, my girl was safe and my knee will be ok and I get to say I went snowshoeing again!
Posted by Hailey and Zaphod and their Lady at 6:00 AM