Hailey and her Meds Update

Today is the 27th day Hailey has been on her meds.

Side effects:
-The second week we saw a serious decrease in her appetite, which is exactly the opposite of what should happen. I emailed our vet and he said to ride it out if we could. I went out and bought some "junk food" to put a tiny bit into her normal food to see if that would encourage her to eat. It did and she is now eating slightly less, but closer to normal. She is eating probably 2 cups instead of 2.5 cups. (compared to less than a cup during the non-eating week).
-No others


Behaviour:
This is the most important. What we have noticed is that while she still gets upset by the same things, she is able to cope better. She just takes a baby and hides. We don't get the frantic behaviour. No obsessive barking. No destruction.

Because of this we will do another month.

Thank you for your suggestions/support from our last update. Blogville rocks! 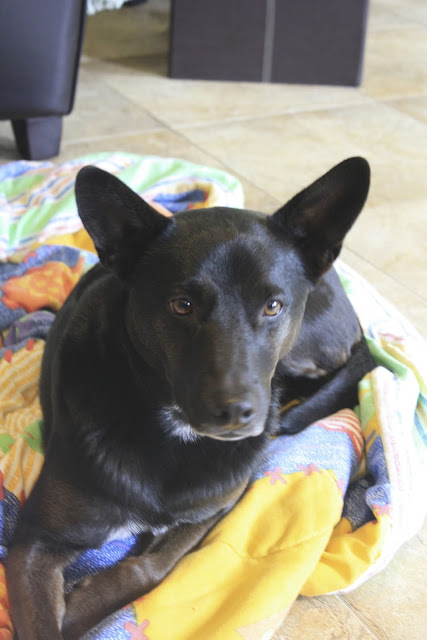 Murphy and Stanley suggested to save money, getting her prescription filled at Costco. That is a great idea, however, Costco is a bit of a pain to get to from our house and we tend to go only every 4-6 weeks. If we aren't organized it could be an issue. Our local drugstore is on the way to the grocery store which we go to almost every week. We will stick with it there for now. Sometimes convenience trumps saving a few dollars!

Lily and Edward suggested working with a behaviourist. Several years ago we did explore that. She wasn't a good fit for us. Her main idea was to medicate Hailey first. She gave a few suggestions, which we worked on. Overall, we didn't find it helpful and she cost a lot of money. It was $500 for the initial visit. There isn't really another option in our area, so we will do our best without professional help.
Posted by Hailey and Zaphod and their Lady at 6:00 AM