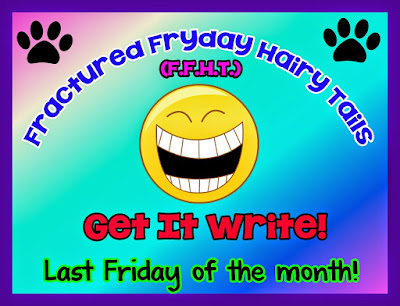 Today I am participating in Murphy and Stanley's FFHT. The rules are simple, write a post using the target sentence. I hope you enjoy my spooky tail! 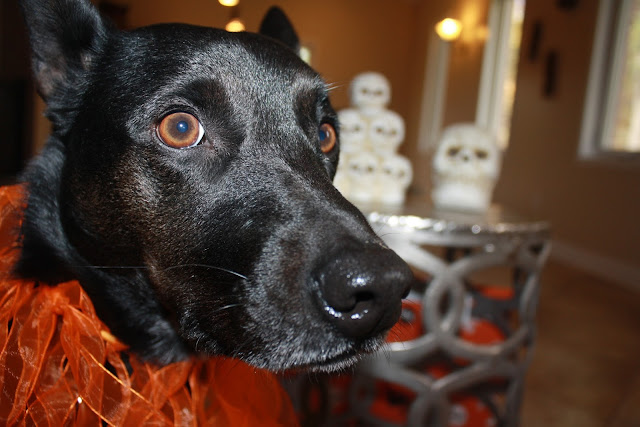 It was a dark and stormy night, the wind was howling, and if I hadn't been on my Prozac, I would have dug a hole through the wall.

I was pacing the floor  resting peacefully when I heard a tap at the door. It was very faint and at first I thought it just the wind. I quickly realized something was there.

Pushing my fear away, I raced like a mad woman carefully went to the door. There was no one there. Only the jack-o-lateen sitting on the porch, the light dancing in the wind. I turned to go back to bed, when I heard the tapping again. I turned and again nothing was there. This repeated several times until finally, I had enough and was leaving the front door area to go curl up in bed.

As I was about to enter my bedroom, the light from the pumpkin caught my eye. There was Red John, the evil Red Squirrel, standing, holding the jack-o-lateen over his head. It looked like he was going to throw it at the house.

I set of my bark alarm, which drew the attention of my people. They slow and reluctantly in a grump, came racing to see what was wrong. They saw the jack-o-lateen laying on it's side. "The wind" they said, as they blew out the candle and brought it in.

I knew the truth. Red John was going to use the jack-o-lateen as a Malotov cocktail. If I hadn't been so alert, that wily squirrel may have gotten the best of us. And that my friends is why "After that I never turned my back on another pumpkin."