It was a crazy weekend at our house. For about 24 hours we had 2 human children here. Our human cousins, Maggie (aged 5) and Troy (aged 3). Having kids over is exhausting.

I use to be very, very afraid of kids would and I would bark for hours if one was in my house. But as I mellow or get use to them or the drugs work, I am far more tolerant. The kids will say I bark all the time, but I hardly barked at all. I barked like 3 times. Now the kids on the other hand, they were fearful of us. They have cats. They don't spend a lot of time with big dogs. They do not like barking. It makes them cry. Which may at times result in more barking.

Also, Uncle Chris and cousin Emma came over for most of the time, so it was a full house. Lady says she meant to get more pictures, but it was just too busy. She says kids keep you very busy, especially when you are not use to them.

Phod enjoyed watching them dance to the TV. Earlier in the day, I enjoyed sharing popcorn with them. 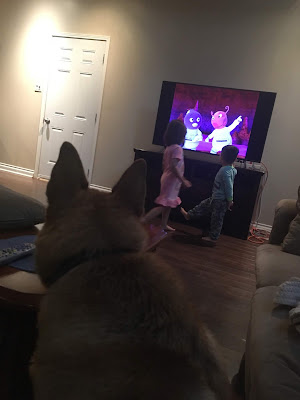 Because Uncle Chris was also over, the kids slept on a mattress in my room. There is no photographic evidence, but I did sleep in bed with them. Man noticed in the wee hours of the morning and woke up Lady to tell her. (She was thrilled about that . . . not!)

In the morning, the kids were afraid I was going to bark and thought my yawn was too loud. I only started to bark when they covered their years and whined. I thought they wanted to play. 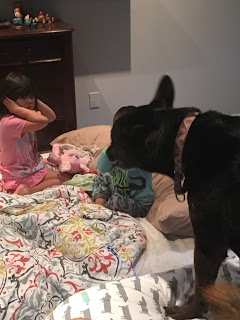 At any rate, I was an angel this weekend, and all the mischief was caused by the rug rats. I really want to love them more and I hope as they get a little older they will be less fearful of me.

The thrilled for once the mischief wasn't mine Hailey Bug