Mischief Monday - It Wasn't Us, It Was a Cat

Lady was pretty sure the first mischief Monday after her time away, would be about our behaviour in jail. Just because we have a history of fence fighting and acting like jerks, doesn't mean that is how we always are. The jail warden said we were the best behaved we had ever been. We didn't fence fight at all (proving it wasn't us who ever started it), and we actually got to play with some other dogs. We may have ripped up one of our kennel blankets, but Lady said that is ok, because she buys old comforters at the thrift shop for our kennel blankets so we can do this.

The story of mischief goes back a few weeks before the Lady and Man left us for 87 million years. It was a Thursday morning. Lady noted as we left on our walk there were a lot of crows the tree at the end of the driveway. By a lot, she means over 20. It was Phod who alerted her that a  cat (who will be referred to as Cedar going forward) was in the tree. When the people left for work about an hour later, Cedar was still in the tree. When the Man got home from work 87 million hours later, Cedar was still in the tree.

The Man assumed Cedar was stuck (she had been there for at least 11 hours) and did his best firefighter impression and took his new ladder and went into the field (which is actually owned by a neighbour who just cottages here) and rescued Cedar. 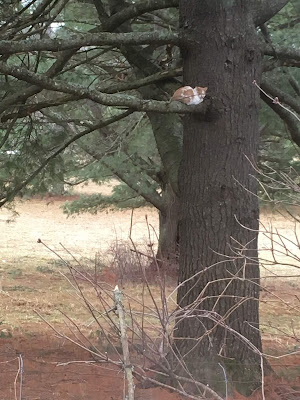 While Cedar seemed nervous at first, she was very cuddly and full of purrs. The Man brought Cedar to our garage and gave her food and water. Lady happened to be working late that night (she works late a lot) and the Man realized if she came home to a cat, we would have a cat. Lady confirms that unless the true owner was found, we would have had a cat. The timing was not good with the people about to abandon us for 87 million years. So the Man put us in the bedroom, Cedar in the bathroom, and armed with her picture, started a door to door search for her people.

His search lead him to the cat house down the road. People call it that because there can be up to 10 cats and several dogs outside this house at any time. They all look well cared for, and we aren't sure if they are all their cats, or if they have just become the house that cares for them. The nice cat Lady thought Cedar looked like one of theirs, so gave the Man a crate for him to bring Cedar home. When the Man arrived with Cedar, the cat Lady said 'this isn't ours' but agreed to take her and look for her owner or make sure she was cared for.

By the time the Lady got home, the cat was gone. We searched the house for a couple of days, sure the Man had a cat hidden somewhere. Our Lady was a little sad, but she understood the Man's choices.

When the people arrived from leaving us for 87 million years, there was mouse poop under the sink. There have been no signs since they returned. Perhaps that is a sign that a cat should make her home here!