Travel Thursday - The Adventure of Getting There

I will start this post by saying how fortunate the Man and I are to be able to travel as much as we do. I do have dog owners guilt, leaving them at camp, but know they are in a safe place and have a better life than most people on the planet. Travel is a priority for the Man and I, and if life has taught me anything, it is that do things when you can because you never know if you will be able to later.

On Thursday January 24th, we, along with Uncle Chris, were scheduled to fly from Ottawa to Montreal and then Montreal to Miami. We were to land in Miami around 8 pm.  Instead this is what happened . . .

We were really delayed leaving Ottawa. We sat on the tarmac for over 30 minutes when we reached Montreal. The 19 minute flight took us almost 2 hours in total (we could have driven to Montreal in that time). This meant we missed the connector to Miami. The flight out of Montreal Friday morning only had room for one of us.  Sending us back to Ottawa would have us miss our ship. So the airline decided to send us on to Toronto (leaving Montreal around 10 pm, to give our luggage lots of time to get to the plane with us) and we would take a 7:30 am flight out of Toronto and be to Miami by 11. Lots of time to catch our cruise ship that we had to be on at 3 pm.

While waiting in Montreal for 5 hours, we were able to cancel our hotel in Miami (big thank you to them for refunding our money when they didn't have to) and book a hotel in Toronto for the about 4 hours we needed a place. It was a much better idea than sleeping in the airport.

We kept busy in the airport at the bar playing a favourite game, Exploding Kittens (which I won most of the time).  We also played this on the plane! 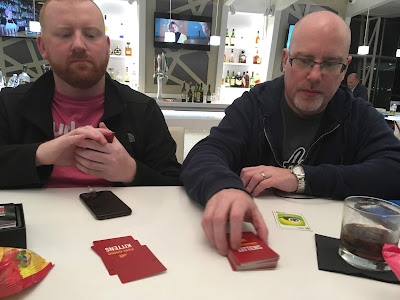 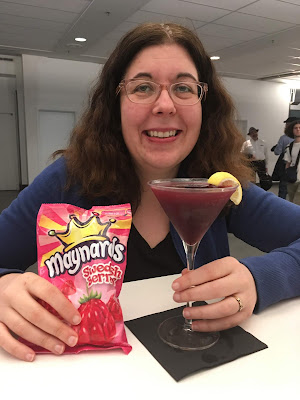 To make this long story short, we ended up in Miami shortly after 11 on Friday morning, but the airline decided to send our bags to Toronto that morning and then to Miami for 5 pm. This was a problem because our ship left at 4. There was no where on this cruise that we could get our bags (due to issues in Mexico they won't send them there). So, we had no bags (I had carry on that they convinced me to check, never again) and in my purse I had a pair of shorts for me and a pair of shorts for the Man and a bathing suit for each of us.

We googled the nearest TJ Maxx, took a cab there and spent about 15 minutes (which included trying things on) getting what we needed as a minimum for a week on a cruise ship. We looked crazy racing around and then asking them to pack things into our suit cases.  Walmart was next door and we grabbed our toiletries we needed. Total time at this plaza was under 40 minutes (I had made a list of the essentials so that helped). We then uberred to the ship and were on it with enough cloths to live with by 2.

[For those interested this is what I bought, as I had a bathing suit and one pair of shorts - one black dress, one pair of dress sandals, 4 tops, one pair of flip flops, a pair of pjs, a bra, underwear and ankle socks - plus I added 2 dresses in Mexico. We will be making a claim with the airline. We are entitled to $150 for the first 24 hours and then $50 for each additional day - so about $450].

I would also like to take the time to thank the cruise line (NCL) for being so helpful with the bags. They talked to the airline daily. The Man's bag actually got totally lost at one point, but was found. They expedited a load of laundry for free (we had it back in about 4 hours), sent us a bottle of wine and treats, gave us t-shirts.  They made our life easier.

At any rate, we were reunited with our luggage in Miami when it was time to fly home. Our now 6 bags (we each bough one) all made it home.

While this was a big stressor and I learned a lot (like how few clothes I really need and never check a bag . . .  and in case they make you have more in the purse) we had a great time.

I will share some pictures from life on the ship. I will share our ports in later posts. We had 3 full sea days so lots of relaxing time.

In summary: I drank too much and read 4 books!


Next time I will share a visit to some ruins in Mexico!