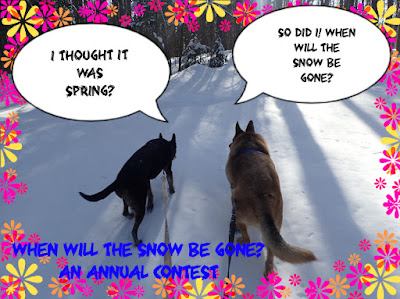 Before we get to the contest update, we thought we would share something very Canadian with you. Our neighbours are making their own maple syrup this year. On our walks we see the buckets collecting the sap. 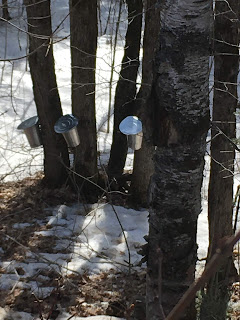 Quebec, our province, makes about 70% of the world maple syrup and over 90% of Canada's syrup. American friends, we are talking pure, real maple syrup, not the "table syrup" you seem so fond of that is just corn syrup and no offence, not really edible to your friends from the North. If you have never had fresh, just boiled syrup, you can't appreciate how amazing it is!

Interesting story - in 2011-2012 there was the Great Canadian Maple Syrup Heist. During this period, thieves stole nearly 3000 tons of this maple goodness. This was valued at almost $19 million Canadian dollars at the time. They were selling it to people in the US in small batches and those buying it were unaware it was stolen. 17 men were arrested in relation to the theft. Here is the most severe sentence were 8 years in prison and a $9.4 million fine, with an extension to 14 years in prison if the fine couldn't be paid.  We take our maple syrup seriously in this country (it does run through our veins after all!)

We have some guesses for the next week - and they could be right because as of lunch yesterday, there was still snow in the yard and it was snowing! Lady will say this is the earliest spring then she remembers (last year the winning date was May 11 and the year before, we don't want to talk about how much snow we had in April!). Maybe we get this one nice thing during this crisis (besides the peeps being home 24/7).

The pictures were taken from inside as it was very, very wet out and a fox was around. (We liked tracking her later on leash, no pictures captured today. She has been around a bit, so we hope to capture her, she is beautiful).

Here is the weather forecast for the next few days . . . still snow, but will it be warm enough to melt the snow? 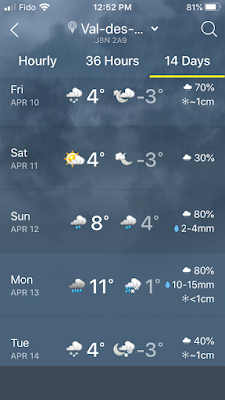 Come back next week to find out and to see us in our Easter stuff!
Happy Easter!