Mischief Monday - On The Way To The Kennel

While it was reported the dogs were good at the kennel (although Phod lost some weight), drop off did not go as well.  It went something like this:

Started off fine, with Hailey harnessed in behind the passenger seat and Phod sitting behind the driver.

About 2/3 of the way there, Phod (who usually gets car sick) decided to throw up where Hailey was sitting.

Hailey didn't like being trapped with vomit, so she chewed the harness (at first I thought she had undone it, but no, she chewed it).  I couldn't even get mad at her for it. I would not like to sit in vomit. 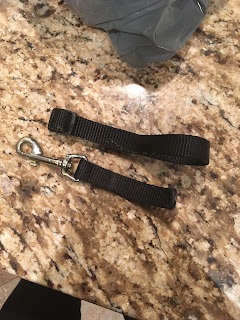 I have a simple barrier to keep the dogs in the back if they are lose. Hailey popped up under it.

For the rest of the ride she sat sort of on the console between the driver and passenger seat. Phod stayed in the back.

The drop off itself was embarrassing. The kennel owner actually said 'what is with them today?'.  It was the first time I, the Lady, had dropped them off alone. Other times it had been both of us or the Man. As I was walking them back to the back to their 'room', Phod tried to jump into my arms repeatedly. Lee was terrified. Once we got them to their 'room' I couldn't leave without them following. The owner had to hold on for dear life while I walked away. Lee was screaming and Phod was barking. By the time I got back to the front (where they couldn't see me) with the dog food they had settled, but they did a really good job at making me feel very bad for leaving them! Sigh!

We are hoping next summer when we travel, they will be able to stay with Uncle Chris so we won't have the same trauma!