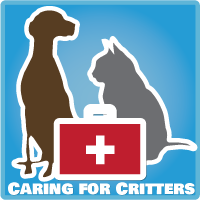 We are participating in the Round Robin Caring Critters hosted by Heart Like a Dog. Tomorrow, go to Travels with Barley to learn about Lyme Disease.

I would like to share with you the saga of our first dog, a Loki and an auto-immune disorder.

It started in 2006 while I was working overseas for 3 months. I didn't know it had started as my husband didn't want to stress me out while I was away. Loki, who was about 5 at the time, had become very ill. He stopped eating. He had to be force fed (and by this I mean they had to shove food down his throat). Blood work determined that his body had attacked it's own red blood cells. We put him on a drug cocktail (sorry, just recently I got rid of all his medical records, but it included drugs to boost red blood cells and drugs to suppress the cells that were killing them).


Loki went into remission until 2009. In spring 2009 I could tell something wasn't right with him. My vet was on sabbatical, so I took him to one of his partner's. This vet brushed my concerns off and I let it go because my vet was back in a few weeks. A few weeks later I took Loki back to the vet and he took my concerns seriously. [Note: our vet happens to be a very close family friend]. Even if our vet wasn't a friend, I would have kept taking him back until I got answers. The lesson is, if you think something is wrong with your pet, trust your instincts and find a vet who will take you seriously.

Our vet did a bunch of tests (blood work, ultrasound, liver biopsy) and it was determined Loki had immune mediated hepatitis causing cirrhosis of the liver (try saying that 5 times fast). The cause of this was unknown and it is rare. To find the treatment, our vet used online vet forums and talked to vets all over the world.  He determined that at best, Loki likely had one year of life left. His body was attacking itself and at best we could slow it down and keep him comfortable. To do this, we used a drug cocktail that was adjusted at least once per month (more often toward the end). After about 3 years, I got rid of the records, but it was as many as 15 pills a day. It was very complicated and we had a chart (as some pills were to be taken every 2 days), a pill cutter and a pill container. I know there was steroids and immune suppressors. The best side effect of the cocktail was Loki's fur became puppy soft. It was great to snuggle such a soft boy, and he was very snuggly.

During all this blood work, tests etc. etc. Loki remained a positive happy boy. Going to the vet was still one of his favourite things to do. He was often so excited he would pee on the floor (a habit he had all his life!). I think he only grumbled once during blood work and the tech was shocked as he was normally so happy!

After several weeks on the drugs, Loki improved and he lived quite comfortably for the next 9 months. We did everything we could in that time to give him the best quality of life with the time we had left with him. At the 9 month mark, we started to see the decline. Our monthly trips for blood work became bi-weekly.  Loki underwent another ultrasound which showed the disease had progressed. I had opted to not to put him through another biopsy, because it wouldn't give us any useful information, we all knew he was dying.

During the last 11 months of his life we had such contact with the vet, Loki's HUGE file was never filed. It was either on the vet's desk or in a special place they keep files for animals who are receiving a lot of care. Everyone in the clinic knew us. If our vet was not in and we called, other vets were hesitant to answer our questions/make suggestions, because this was rare and complicated. Either we or they would call our vet at home.


Around the 11 month mark,  we could tell the end was coming and one day Loki had the best day he had in weeks, followed by the worst night. About 5 am he gave me the look, and we knew it was time. We called our vet and set up for a time that evening to have him euthanized. We had made a promise to him that as long as he was not suffering, we would do everything in our power to keep him alive. However, when the time came, we would make the very difficult choice to say goodbye. We didn't want him to suffer one day more than he had to. It was a very emotional experience for us and the staff at the clinic. We were blessed to have such amazing, loving care for him.

If I could go back, there is nothing I would do differently about his treatment. I know our vet went above and beyond to try and find the best treatment in the world for him. His suffering was minimized. We have learned since, that his case is still used at the clinic as a teaching case. I hope his case can help others.

I also understand that not everyone would be able to make the same choices we did. It was very, very, very expensive to give Loki those last 11 months. A rough calculation at the time showed we spent about $10 000.  His drugs cost at least $500 a month. We are blessed that we could give him this time.

I also learned the stress taking care of a dying pet can be. In the moment I didn't realize the emotional toll it was taking on me. It was only after his death that I realized the stress we had all been living with. I should have known the stress it was causing because our other dog at the time, Gemini, actually developed a stress disorder. She developed obsessive drinking (she drank over 8 cups of water a day, which was too much for a 15 lb Lhasa Apso mix) and peeing (she started peeing everywhere) and her fur started to fall out. She also underwent a lot of tests and in the end it was stress. While this wasn't great, it was much better than the alternatives our vet was testing for (Cushing's syndrome for one). One of the lessons we learned is that everyone in the house is very effected by the illness of another member and everyone needs some extra TLC.

Thank you for reading our long journey. Even with the stress and the cost, I would do it all again to get those 8 years with our Loki.

Posted by Hailey and Zaphod and their Lady at 8:09 AM