So much mischief to tell you about.

First this is how Lady's toe is doing almost 2 weeks better. It is healing but still hurts if she walks or stands too long. 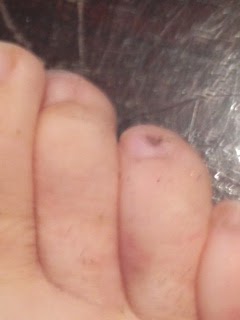 On Saturday the people got up and got going so they could get to Costco before it got busy. Then this happened: 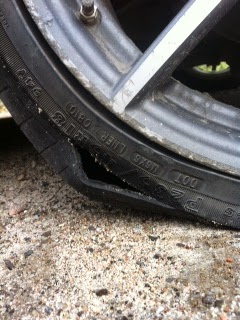 Lady and Man had to wait for roadside assistance to come and change the tire (Man can do it he says if he had a proper jack). Then they drove to town to find a new tire. Turns out Man's sports car needs special tires. No one had them, he had to order them. Since they were in town they went to Costco anyway, arriving around 11:30 which is crazy lunch time at Costco and makes Costco H-E-double hockey sticks. This made Lady grumpy. It also meant that the people were out of the house longer than they wanted and we were alone. They were only home for a short time when they had to go out cause they were babysitting our cousin Maggie. Maggie was very good and didn't cause mischief.


On Sunday, Man caused mischief by taking Lee out without Phod. He wanted to do some off leash training with her. Phod did get to join after 10 minutes, but he was sad to have been left with the Lady.

Other mischief - Blogger has been acting weird  this weekend (or maybe it is the iPad Lady just got from our Grammie). It isn't always letting us comment and sometimes it just throws us out of a site.

Lady also realized she didn't take one picture of us last week, not one! She tried to say it is in part because her computer is apparently almost full and she needs to figure out how to safely save the 18 000 pictures (at least half that are her animals) before she loads the computer with more. We say excuses! Expect some recycled pictures this week until Lady figures out how to fix her problem.

Another weekend of mischief for us!