Mischief Monday - When It Rains Inside

The scene: The warmed day in months, we are all having a Saturday afternoon bed nap.

Lady is awoken to the words "get a bucket, the roof is leaking" and it all went down hill from there. There were a LOT of HBO words. A LOT! This cannot be understated. Lady is not a crier but she has a mouth that would make a sailor blush. 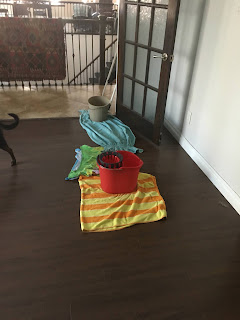 After the buckets were in place, as the Man raced to the neighbours to see if anyone was home to borrow a ladder long enough to reach the roof (no one was), Lady started looking for roofers. (FYI: A long ladder has been ordered and will be here on Tuesday). 1.5 hours after it began, a roofer was on the very snowy roof. 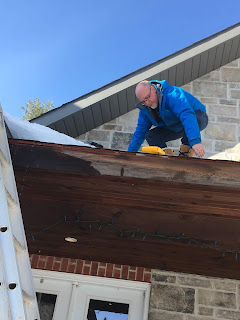 The short story: Given how much snow is up there, the exact amount of damage is unclear. The roof itself is in good shape. The problem is with some joints and the V part. The building inspector missed this. The roofer (who looks 12 by the way, but seems to know his stuff) needs to wait for the snow to melt to come back with a drone (welcome to the 21st century) to do a full inspection and measurements. Basically we need to fix these joints and put in something called flat roof in the V. Once the roof is fixed, they can take on having the bedroom ceiling repaired. This is going to be expensive. Thank goodness for the emergency fund!

In the meantime, the roofer left a long ladder and Lady and Man have had the opportunity to shovel snow off the roof. Lady is proud of herself for getting up (she listed off all the brave things she has ever done, the list is short but includes skydive, zip line, bobsled, climb a pyramid as she went up). Getting down was really not pretty but due to the danger of it, there is no video so she can pretend it was graceful.


Let's hope the snow melts sooner rather than later so at least we don't have to keep buckets in the bedroom and the leaking stops. (The leaking occurred from about 2:30 pm-9 pm on Saturday. At the time of this writing there had been no more leaks, but it is colder today and melting may not be happening)