Once Upon A Time and Show and Tell 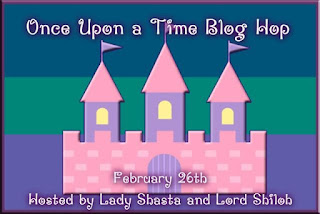 We are thrilled to be joining  Shasta and Shiloh for the Once Upon a Time Blog Hop.  Here is our 'tail'!
Pink=Haley
Blue =Zaphod

------------------------------------------------------------------------------
Once upon a time there was a beautiful princess named Hailey. She was beautiful, and smart, and loving, and wonderful . . . .
I think they get the point Hailey. I think it would be better to start, in a far away land . . . .
I thought we agreed I would write this story. Now where was I?
Telling the biggest 'tails' about yourself, teehee!
Be careful or I will feed you to the dragon.  Anyway, there was a beautiful princess named Hailey. She was wonderful, but she was lonely. She didn't have a prince to call her own. She only had an annoying brother named Phodrick.
Princess Hailey may have thought Phodrick was annoying, but everyone knew he was the most handsome and bravest prince in the land. He actually had already killed a dragon (you can read about that HERE). However, he was highly motivated to find someone, really anyone, to take his occasionally truly annoying sister away.
You can't say that about me, I am not annoying. I am wonderful.
Hailey, stop breaking the third wall and let's just work together and write this story. You can write a few sentences and then I will, ok?
Ok, but only because we need to get this thing done. Where was I?  Oh, I remember. The perfect princess Hailey decided it was time to find a prince. She needed someone who was handsome, smart, brave, destructive, and fun. She decided instead of waiting around for him to come and find her (it is the 2000s after all), she would go out in search of him herself.
Because Phodrick worried about his independent sister, even if she didn't notice, he decided he would come with her. He may be able to keep her safe and he could definitely keep her on track. The two set off on a journey. They didn't get very far when Hailey got distracted by a squirrel.
Out of no where a terrible and evil red squirrel, known as Red John, appeared on the path down from the castle. Hailey went on full alert and did her best to put Red John to rest. She tried to climb the tree after him. She spent the rest of the day waiting for him to come down. When he didn't she got tired and decided to go home.
The next day the two set out again in search of love for Hailey. They made it a little further when Hailey caught wind of a groundhog.
It was an evil groundhog in my kingdom, it needed to die. I waited all day for it, but couldn't catch it, so decided to go home and try to find love again tomorrow.
You can all see the pattern that started to happen. Finally after like a week of this trying to go, Prince Phodrick had a wonderful idea. "My dear sister Hailey, it seems that we are having some troubles getting out into the world to find you a prince. It is 2016, why don't you try online dating?"
"Phodrick, that may be the best idea you have had in a long time. Let me set up a Dog Harmony account and see what I find."  Hailey worked hard on her profile. She was surprised by how many eligible bachelors were outside her kingdom. After careful consideration, she picked a French boyfriend, Count Easy Le Destructeur. He was smart, handsome and knew how to destroy things.
Hailey was happy so Phodrick was happy and everyone lived happily every after! 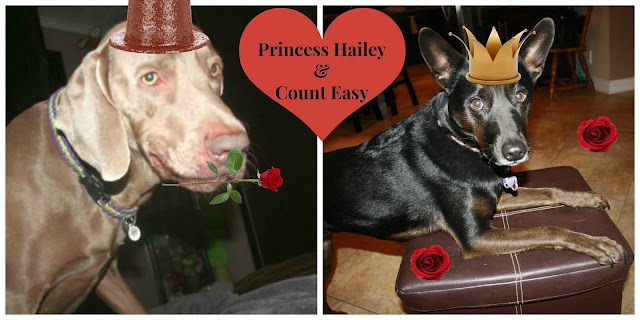 Email ThisBlogThis!Share to TwitterShare to FacebookShare to Pinterest
Labels: Another blog, story